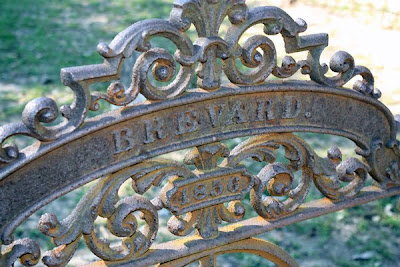 There are so many things to see and do in Camden while staying at Bloomsbury Inn.  In Quaker cemetery, we continue to highlight some interesting sites.
Joseph Brevard has been described as  unostentatious, industrious, and upright.  Born July 19, 1766, Joseph entered the revolutionary service in 1782 at the age of sixteen. He was commissioned a Lieutenant in the North Carolina line, filling this position until the end of the war. His brother Alexander described him as delicate and small of statue, and felt sorry for him when it came time to mount the guard.
Joseph became a secretary to General Arnold who was in command of Philadelphia. It seems that young Joseph had a fine hand at writing. Joseph Brevard had seven brothers, besides himself, who fought in the Revolutionary War. His family performed distinctively and patriotically. At the end of the war, Joseph settled in Camden, South Carolina. In 1789, he was elected by the Legislature to the position of Sheriff of Camden District. He was only twenty-three and served well in this arduous post in those unsettled times. In 1792, he was admitted to the bar, and on March 17, 1793, he married Rebecca Kershaw.
A successful lawyer, he began in 1793 the compilation of the law reports which bore his name and continued to do so until 1815.  In 1796, he as elected to the state legislature and served two terms until 1800.   He was elected a Judge in 1801. The follwing year,  his wife Rebecca passed away. Judge Brevard continued on the bench until 1815 until ill-health caused him to resign. In the next few years his health improved, and in 1818 he won election to Congress and served one term. In 1821, at the age of fifty-five, Judge Brevard passed away at Camden. Judge O’Neall made the following statement concerning Congressman Brevard: “In every situation and office of life he did his duty. What more can or ought to be said, unless it be to say that he feared God and kept his commandments, which is declared in the inspired volume to be “whole duty of man.'”
Joseph Brevard had four children:  Dr. Alfred Brevard, Edward Brevard, Eugene Brevard, and Sarah Aurora Brevard Elmore.History-rich is an understatement concerning Camden, South Carolina. As you visit, you will quickly learn from Dr. Bruce Brown of Bloomsbury that you must visit often and visit soon if you want to learn more.
Accommodations
Specials
Historic Property
Breakfast
Email
Call
Book